Veronika Cummings is professor for Human Geography at the Johannes Gutenberg University of Mainz and associate scholar at the Middle East Institute of the National University of Singapore. Her work focuses in particular on the production of social and spatial inequalities from a praxeological perspective. Furthermore, her research concentrates on cosmopolitanism and the impacts of international migration and trans-locality on urban societies. She did extended research in Brazil, the Sultanate of Oman and the other Arab Gulf States, South India, Sri Lanka and Singapore.

Anton Escher is professor for Cultural Geography at the Johannes Gutenberg University of Mainz, managing director of the Institute of Geography, as well as director of the Centre for Intercultural Studies (ZIS). He is an associate editor of Erdkundliches Wissen, Muslimische Welten, Media Geography at Mainz and Intercultural Studies. His work focuses in particular on empirical research on the development of historic old towns in the Arabic World, dynamics of global Arabic social networks, construction of space and place in feature films, the interrelation of media and everyday-life, the power of cultural phenomena in the context of migration and tourism, and atmospheres. His latest book publications are Raum und Ort (edited with Sandra Petermann, Stuttgart 2016), Re-Ethnisierung, Repräsentation von Indigenität und gelebte Bikulturalität (edited with Mita Banerjee and Andrea Blätter, Heidelberg 2015), and Palestinian, Lebanese and Syrian Communities in the World. Theoretical Frameworks and Empirical Studies (edited with Trevor Batrouney, Tobias Boos, and Paul Tabar, Heidelberg 2014).

Florian Freitag studied English and French at the University of Konstanz, at Yale University, and at the University of British Columbia. He received his Ph.D. in American Studies from the University of Konstanz in 2011. Since then he has been lecturer (wissenschaftlicher Mitarbeiter) in American Studies at Johannes Gutenberg University Mainz. Freitag’s main research interests include Comparative North American studies, literary regionalism, Periodical studies, Performance studies, and Theme Park studies. Freitag is the author of The Farm Novel in North America (2013) and the co-editor of collections on transcultural dynamics, North American regionalism, phenomena of cultural crossings, and issues of time and temporality in theme parks. His other work has appeared in Amerikastudien/American Studies, Studies in American Naturalism, Canadian Literature, The Journal of Popular Culture, Classical Receptions Journal, and Continuum. Freitag’s current publication projects include a monograph on the representation of New Orleans in popular culture and a discussion of the representation of the future in Disney theme parks. Freitag’s research projects on New Orleans and theme parks have been funded by the German Research Foundation (DFG) and the Volkswagen Foundation. Freitag is the founder and leader of the interdisciplinary research group on immersive spaces at the Research Center of Social and Cultural Studies Mainz and of an international, interdisciplinary research network on theme parks.

Kaspar König is a transdisciplinary artist with a focus on the embedding of the context into the project, sculpture, concert or workshop. He teaches as an interim Professor for univ.-Prof. Peter Kiefer in Soundart and Composition at the Conservatory in Mainz. He owns a degree in Industrial Design from Berlin UdK and a Masterdegree in Soundart and Composition. He works since 1999 as an independent artist with sustainable design, sound & performance-art and since 2012 as a scientific Artist at the University of the Arts in Zürich. He creates real inventions for the eyes, ears and other senses using recycling techniques and simple systems to make social sculptures. He organizes workshops & exhibitions, artist in recidencies and installations. He is initiator of a non-profit organization "stichting de vier koningen" for catalyzing culture. And recently he started a non profit for the trans-artistic cooperation between Havanna, Zürich, Berlin en Vienna. Visit the website www.kasparkoenig.com for more Information.

Joern Langhorst is Associate Professor in the College of Architecture and Planning at the University of Colorado Denver, and a Fellow of the Colorado Center for Sustainable Urbanism. Previously he has held faculty positions at the University of Oregon and Iowa State University. His research and teaching focus on landscape architectural theory, on issues of visualization and representation, emphasizing film, and on post-industrial and post-disaster sites with a focus on the cultural production of space. A particular emphasis is on post-industrial and post-colonial cities and their mechanisms of de-development and re-development. He has been consulting on the recovery and redevelopment of post-disaster and post-industrial sites nationally and internationally, and has worked extensively in post-Katrina New Orleans, and has authored numerous book chapters and articles on these and other topics, such as “(Re-)Framing Urbanity: Contestation, The Moving Image, And The Right To The City”. In: Edward Clift; Annette Brauerhoch; Mirko Guaralda; eds. Filming the City–Urban Documents, Design Practices & Social Criticism Through The Lens. London: Intellect Books, 2016, 46-60, "Recovering Place – On the Agency of Post-Disaster Landscapes". Special Issue "Post-Disaster Landscapes", Landscape Review 14(2), 2012, 48-74 and the forthcoming book chapter “Enacting Landscape Democracy: Assembling Public Open Space and Asserting the Right to the City”. In: Shelley Egoz, Tim Richardson, Deni Ruggeri and Karsten Jørgensen, eds. Defining Landscape Democracy, Cheltenham: Edward Elgar Publishing.

Chris Lukinbeal is an Associate Professor and the Director of Geographic Information Systems Technology programs at the University of Arizona. He as published books on The Geography of Cinema, Mediated Geographies and Geographies of the Media, and Place, Television, and the Real Orange County. He also has published academic papers and book chapters on topics ranging from film, media and landscape studies, as well as geographic education and cartography. He an editor of the book series, Media Geography at Mainz and an Associate Editor for the American Association of Geographer’s journal Geohumanities.

Dr. Roman Mauer is Academic councillor for film studies/media dramaturgy at the Johannes Gutenberg-University of Mainz. He graduated in film studies, literature studies and ethnology in Mainz and did his doctorate on the topic of Jim Jarmusch in 2004. He taught at the HFF Munich (2005-2009), dffb Berlin, HFF “Konrad Wolf” Potsdam/Babelsberg and HS Mainz. Since 2008 he is working as a research associate at the Johannes Gutenberg-University and organized international series of lectures and media-practical project cooperations with i.a. ZDF/arte, the Friedrich-Wilhelm-Murnau-Foundation, the German Cinematheque Berlin, the HFF Potsdam/Babelsberg and the Institute for Media Design in Mainz. His research priorities are: narratology of film, comic books and sonic art, film stylistics, audiovisual film didactics, methods of visualization, inter- and transculturality of film and tendencies of today´s documentary film.

Tara McPherson is Associate Professor of Critical Studies at the University of Southern California’s School of Cinematic Arts. Her research engages the cultural dimensions of media, including the intersection of gender, race, affect and place. She has a particular interest in digital media. Her Reconstructing Dixie: Race, Gender and Nostalgia in the Imagined South (Duke UP: 2003) received the 2004 John G. Cawelti Award for the outstanding book published on American Culture, among other awards. She is co-editor of Hop on Pop: The Politics and Pleasures of Popular Culture(Duke UP: 2003) and editor of Digital Youth, Innovation and the Unexpected (MIT Press, 2008.) Her writing has appeared in numerous journals, including Camera Obscura, The Velvet Light Trap, Discourse, and Screen, and in edited anthologies such as Race and Cyberspace, The New Media Book, The Object Reader, Virtual Publics, The Visual Culture Reader 2.0, and Basketball Jones. She is the Founding Editor of Vectors, www.vectorsjournal.org, a multimedia peer-reviewed journal affiliated with the Open Humanities Press, and is a founding editor of the MacArthur-supported International Journal of Learning and Media (launched by MIT Press in 2009.) With major support from the Mellon Foundation, she is currently working with colleagues from leading universities and with several academic presses, museums, scholarly societies, and archives to explore new modes of scholarship for visual culture research. She is the lead PI on the new authoring platform, Scalar, and for the Alliance for Networking Visual Culture, scalar.usc.edu.

Helen Morgan-Parmett is an Assistant Professor in the Department of Theatre and Director of the Speech & Debate Program at the University of Vermont. She received her PhD in Communication Studies from the University of Minnesota and her MA from the University of Pittsburgh. Prior to her employment at the University of Vermont, she was Assistant Professor in the Department of Communication Studies at Western Washington University. Her research considers the intersections of media and urban spatiality, with particular focus on television, production studies, and sport. She is the author of the forthcoming book titled Down in Treme: Race, Place, and New Orleans on Television, published with Franz Steiner Verlag, and several journal articles in venues such as Communication & Critical Cultural Studies; Television & New Media; Communication, Culture, & Critique; The Journal of Sport & Social Issues; The International Journal of Cultural Studies; amongst others.

Severin Mueller is a doctoral student in the Department of Film Studies/Media Dramaturgy at the Johannes Gutenberg University Mainz. He has previously studied Media Dramaturgy in Mainz and Communication at the University of Memphis. Currently he is working on a dissertation on the U.S. South on film in transnational contexts and perspectives.

Laura Sharp is a Ph.D. Candidate in the School of Geography and Development at the University of Arizona.  While broadly trained in the discipline of geography, Laura specializes in cultural, social, and economic geography.  She has published articles and chapters on topics of film and geography, popular geopolitics, and social media geography. Laura has enjoyed many collaborations with the Media Geography working group at Mainz, including teaching and speaking engagements, and co-editing the volume, Media’s Mapping Impulse, as part of the Media Geography at Mainz (MGM) book series, for which she also serves as one of two managing editors. Currently, Laura conducts research in Los Angeles, California. There, she endeavors to understand the spatial distribution of on-location filming, the socio-technical arrangements and decision making processes that make location filming possible, how these arrangements and decisions affect the people who live in Los Angeles, and the results that these locational choices have on the final products see in films and television shows.

Elisabeth Sommerlad (Dipl.-Geogr.) is a PhD candidate and research assistant at the Institute of Geography (team Human Geography), Johannes Gutenberg University of Mainz. Her main research interests are media and film geography, construction of space and place in feature films, the interrelation of media and everyday-life, and the medial staging of cultures and cultural diversity. In 2012, she completed her diploma in Geography, Communication Studies and Sociology with a thesis on “Cinematic Marrakech”. Currently, she is working on her doctoral thesis that is dealing with intercultural spaces and the negotiation of cultural diversity in US-feature films, focusing on New York City. Furthermore, she conducts research in a project on empirical atmospheric research. Since 2017, she has been part of an interdisciplinary junior research group at the Research Center of Social and Cultural Studies Mainz (SoCuM), which is working on the topic of Immersive Spaces. 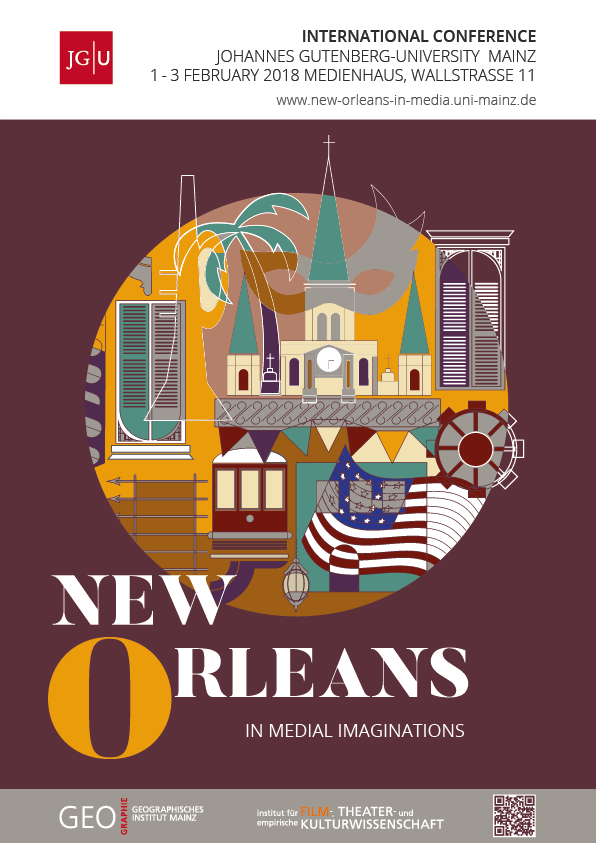